IT'S A BREW-TIFUL DAY TO HAVE A COFFEE !

It is unlikely that one may readily recognize the names of Jerry Baldwin or Gordon Bowker or Zeiv Siegel. But we all know about the brand they  founded-Starbucks, the largest coffee house chain in the world  arguably one of the most expensive as well. Jerry Baldwin and Ziev Siegel were teachers of English and History respectively in the University of San Francisco while Gordon Bowker was a writer-all belonged to academia-world of learning and education. They never dreamt of business, that too coffee business albeit they were all lovers of coffee and tea! Then how come they landed into coffee chain business?

The name they selected -Starbucks is equally baffling! I don't know whether Herman Melville, the American novelist of 18th century who wrote the famous 'Moby Dick' might have turned in his own grave while the trio did that! But surely one of his characters of the novel- Starbucks- became much more famous in the world in a couple of decades than his name, his novel or main characters or founders- could!!

As it stands today while Starbucks is the largest coffeehouse company in the world with close to 33000 retail outlets spread all over the world, it is a 'must read' for anyone but mainly the youngsters to know how they came into that covetable position!! 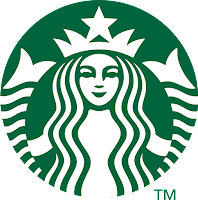 In 1950s there was a famous coffee roaster  named Alfred Peet who was an immigrant from Holland stationed at Berkeley, US. One of the co founders Jerry Boldwin had worked with him who is known as the creator of American coffee concept! The founders decided to base the success of Peet but made on their own roastery techniques to create blends and flavours. Initially raw coffee beans were also purchased from Peets.

One of the initial requirements was to find a brand name which easily will be remembered by the coffee lovers. Various options came out but one Terry Hekler with whom Bouker owned a small ad agency strongly suggested that words beginning with ST were powerful. The trio who came from academia finally zeroed in on STARBUCKS, a fictional character of the first mate .He is described as scrupulous and steadfast in the classic novel 'Moby Dick', although he was never known to have drunk coffee!

Herman Melville is best known for his novels of the sea, perhaps for the fact that among varied jobs he did, one was of a Harpooner in a whaling ship! In the novel 'Moby Dick' which is the name of the whale, the captain of the ship named 'Pequod' was 'Ahab', while the name of the First Mate was 'Starbucks'- rather a minor character comparatively! Obviously the founders settled for the name starting with ST as advised by brand adviser.

Once the name was finalized their  search for nautical mythological creatures  for imaginary logo related with the sea ended with Siren,  an image of bare breasted, twin tailed mermaid from mythology who was known to lure the sailors to ship wrecks with her enchanting music! 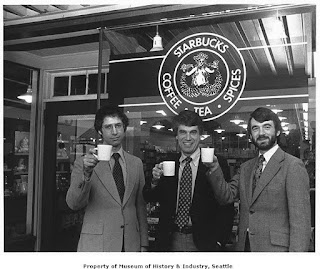 The founders of Starbucks with the first brown logo behind...
but the trio didn't last long to remain as owners

In the following years, it was decided to cover up her over sized boobs  with long hair and dropped suggestive spread tail with the green colour instead of the first one which was in coffee colour.The third logo is what they have now.

As the first brown mermaid is born....

The first store of Starbucks was opened at Pike Place market,Seattle on 30 March 1971 quietly, the spot which has become a tourist spot in later years. The founders opened the place with not fresh brewed coffee, but as a store to purchase coffee beans. Interestingly to this day the décor of the store is kept the same way!

it is equally baffling to note how the mode of business changed while the ownership too changed. Ziev Siegel left the company as early as 1981 while Howard Schultz was appointed as Head of Marketing. It was Schultz who initiated Starbucks to diversify into a full fledged Cafe, selling Expressos and Cappuccinos- my favorites to this day- but the original owners wanted to keep the business strictly as a coffee and equipment seller! One of the two remaining owners Jerry Baldwin who was with Peet's earlier decided to purchase that concern in 1984 along with Bouker and few others! Shultz left Starbucks in 1985 to start his own brand Il Gionale which became an immediate success. In 1987 the two remaining owners-Baldwin and Bouker- decided to sell the Starbucks to Howard Schultz!!

In 1992 Starbucks went public. It was in 1996 that Starbucks decided to expand to overseas. I still remember their first coffee house in Doha at The Mall, which was the first hypermarket in Qatar to the amazement of most in Qatar including me. I presume that it  was in the year 2000 or so which was close to our HQ office in D Ring Road! Doha was yet to wake up as a busy metropolis then, while I used to wonder the logics or feasibility behind opening such an expensive brand there then in an American environment in an Arab country ! But I was proven totally wrong myself within just 3 years later!! 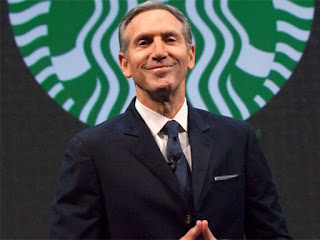 Howard Shultz
In 2003 Starbucks commenced selling food. In 2008-09 Starbucks lost billions in business due to recession but remained active and live until it recovered. During the last many years they have been opening at least two new stores each day somewhere in the word!!
It's a brew-tiful day to have Starbucks!
Before I conclude the article I have to specifically write about Howard Shultz who was the strategist and catalyst of the Starbucks business plan which is seen very successful  today. He was the Chairman and CEO of the company for so many years but the the best part of his career was that he could make the Chinese drink and enjoy coffee who were hard tea lovers for so many centuries- almost the way Alfred Peet, the Dutchman taught America how to drink coffee!

While he considered to be an independent candidate for US presidentship three times including as late as 2019, we don't know what the future holds for him in politics. He has authored few good books including 'How Starbucks fought for life without losing its soul', is into philanthropy and had even ventured into sports related business once owning Seattle Supersonics team for NBA!

There are quite a number of successful ad slogans of Starbucks which have become catchy over the years. "Coffee that inspires" "Starbucks or nothing" are examples. But I would conclude this article here with an outstanding caption used by Starbucks years back but still live in my mind: "It's a brew-tiful day to have Starbucks!"