EYES CAN EXPRESS THAT WORDS CANNOT......

Pen is mightier than the sword but at times a picture is mightier than the pen! A picture or an image is worth a thousand words especially photographs which displays the expression and mood of the person or an event.This is why visual communication skills have conquered the modern commercial  world wherever it is applicable.It was in 1996 that I could take a decision to have a web portal for Al Balagh, where I had been working.Now one may find this matter very silly but hosting own web was a rarity then plus I was  computer illiterate ! It was an expensive affair as well, which  a small organisation like mine those days could hardly venture in this direction.But for some reason it did not stop me to take that decision which proved very effective for our eventual growth as a corporate in later years!

Coming back to pictures,many photographers have made excellent clicks around the world since the camera was invented . But in spite the technology related to photography has been changing fast for good, only few photos will invite our attention. That too among such catchy photos which we come across only very few will register in our minds , others we enjoy and forget.Similarly now a days every commercial firm-big and small- anywhere in the world has a web site but you know very well  how many of them really attracts you!

Two photos which comes to my mind now which falls within this category of 'effective expressible communication' are discussed here.Their eyes can express that words cannot......If we know the background of the photos one can enjoy the same better. Interestingly both are in black and white that too clicked few decades back, which should not be a deterrent to my young readers .........

Amazed?
First one is clicked in the seventies.His face especially the eyes tells you what he is going through......amazement! 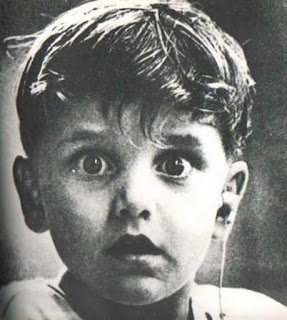 Harold Whittles was a child hailing from Illinois, US.He was born deaf.At the age of 5 he was taken to a specialist ENT doctor who connected a hearing aid to his ears.Yes, that very moment when Harold who had been deaf  hears sounds for the first time was caught in a film by a professional photographer!

Jack Bradley was a news photographer with Peoria Journal Star,Illinois.The photo was published in Readers Digest in Feb 1974 issue with a title "Unforgettable moments caught on film". The whole world enjoyed that photo which took the photographer to professional glory.Being a news photographer he has made a number of professional photos including related to Korean war.What he says about the photo at the end of his career says it all in one sentence"Looking back at that moment I can tell you that I have never taken a picture as magnificent as that photo of little Harold Whittles before that and I haven't since" 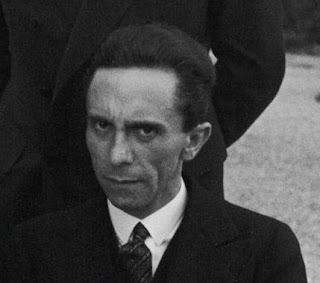 Angry frown?
Frowned?
It is difficult to identify this person for any one who is as young as me or younger unless he or she is  reasonably well versed in history. He is Joseph Goebbels who was infamous in the modern world esp during 1930-45.He was the President of Chamber of Culture or more popularly known as Minister of Propaganda for the German Third Reich.Being policy of the Nazi party under Adolf Hitler,he had spearheaded a hatred campaign against Jews.'Goebbelsian lie or tactic' which we read about a lot these days is derived from his style of functioning-Repeat a lie a thousand times and it becomes the truth!

Alfred Eisenstaedt was a photojournalist,born in Germany but later migrated to US fearing persecution of Jews there and worked with Life Magazine.In 1933 Eisenstaedt was assigned to meet and interview Goebbels who had come to League of Nations (Forerunner of UN), New York. When Alfred was introduced to Goebbels, the later showed all the friendly warmth initially.But the moment he came to know that Alfred was a Jew, his face changed to what we can see above.Goebbels made a scowl!But Alfred was a professional who could click that moment which was published in Life Magazine.In fact 90 pictures clicked by Alfred Eisenstaedt are featured on the cover of this magazine.