As an aircraft starts descending  for landing at Mumbai, on a clear day from the sky, one can see that the colour of the sea around the land has turned to brownish black. Within the shape of an almost semi circular arc with centre as Mumbai city, the colour of the sea for few kilometers is different in concentric semi rings- almost blackish towards the epicentre . For the first time I might have noticed this phenomenon in such an aerial  view in late eighties when the colour was light grey. It did not take much time to find the reason - that waste of Mumbai is flowing to the sea! The noticeable decolourisation obviously is due to uninterrupted, untreated or partly treated inflow of all sorts of sewage to sea over the years!!

As I started travelling all around the globe in similar circumstances later only I did understand the poor state of the country in this respect in comparison to various cities in developed nations. Unfortunately this is not restricted to Mumbai but Chennai, Kochi or any other seaside city in India follow suit- only degree of the colour varies. Difference with land locked cities and towns in the country is that they use rivers,streams and valleys for the purpose! Very much unacceptable, unbelievable situation in an emerging economic, military,technical and industrial power of the world...

When the new Prime Minister and  Govt in India has taken up a clean up campaign of 'Swachh Bharat' recently ,with much enthusiasm and fervor , this is the first scenario which came to my mind. The idea of a clean India is fathered by none other than Mahatma Gandhi decades back followed by various Govts in power from time to time but without any tangible results. Our great nation scores a minus in this respect when we command capabilities- financial, technical and social- to come out of this mess. Few 'dirty' thoughts.......politics apart.

India- the first and last name in sanitation!
Seeing the current poor plight of India in sanitation, only few Indians and others from the the rest of the world may know the fact that the first ever sophisticated sewage systems in the world was in India. In Indus valley around 5000 years back we had drainage channels and street ducts! Then how come India came to this level?Like hundreds of other small and big inventions ancient Indians pioneered based on which non Indians prospered, 'sanitation' also remained within a minority class of people and failed to reach the Indian masses.  Few medical journals have voted for 'sanitation' the biggest breakthrough in the last two centuries. A colonial India remained a mute spectator to this revolutionary event which transformed societies of the west to new heights of standards, health and hygiene. Other epoch making events which a colonial India missed is Renaissance, Reformation, French revolution,Industrial revolution......which had positive impacts on other spheres in Europe.

Whats is the status on India on this matter- as on date UNICEF estimates that almost 594 million- nearly 50% of India's population- defecates in open!! That's unfortunately Incredible India , a nation which has the technology and might to send space crafts to Mars!The fact that 50% of population mostly belong to uneducated rural mass do not relieve India anyway.When it comes to 'throwing rubbish around' we are close to 100%!! I had been to Agra recently. The very sight of polluted Yamuna by the side of Taj Mahal and filthy city streets have not gone from the mind.

Kochi , Sasthamcotta and Allahabad...
Nothing in common among these three places in India other than I have lived everywhere . At the same time it will be a good comparison in this context, India being a land of contrasts how different is the problem from place to place and from rest of the world.

Kochi, my home town is beautiful to any standards but unfortunately do not come to top in the state in the matter of public cleanliness. 'Other metros in India are worse' or 'I love my home town' do not make this accusation anyway light albeit the fact that Kerala stands out as the best state in India and on par with some of the developing countries in cleanliness and personal hygiene but when it comes to public it is a different matter!However if engineered systems are in place for waste disposal with little efforts on orientation to adapt , whole Kerala will improve to world developed standards within no time. 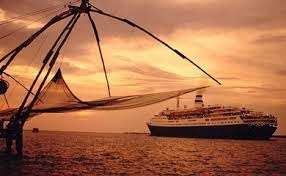 As a ship enters Kochi harbour


Of all  the places I have dwelled for a year or more, Sasthamcotta is the best and unique. That was in 1980-81 while  Geetha & I started our life together. Sasthamcotta is a small town in Kerala where I was posted as an engineer in Public Works Department. We had rented out a house which was almost on the banks of a large lake -largest fresh water lake in the state. I still remember the magnificent view of the lake from the town, named after a temple there and the feel of the fresh breeze in the morning as I rode a motor cycle to my office every day!To the best of knowledge motor boating and fishing was banned in the lake those years. Now I understand from the newspapers that authorities are struggling to keep the lake in the same old  environments since land erosion and waste getting to lake are threats!! This could be only a typical case where hundreds of similar natural beauty laden places are all scattered through out the state and rest of India.

Allahabad is a fast developing city in north India with its original name-Prayaga which comes from the its position at the union of the three rivers-Ganga,Yamuna and mythical Saraswathi.I had the rare experience of spending few months exactly at the spot-named as Sangam, the point of confluence of the rivers, considered very sacred by the Hindus in 1972. My career had just commenced as a trainee engineer in a leading construction company which was entrusted with building a mammoth bridge across Ganges.Any day the place is crowded but the Kumbh Mela which comes every 12th year invites millions- estimated to be between 80 and 100 million- of devotees to the place. The crowd is the largest in the world and to the best of my information this gathering can be seen even from the outer space, the only such event in the world to be seen!!! One can see how much waste all these places and rivers have to bear with.

satellite image of Kumbh Mela
Bad but not hopeless situation...for India
As one goes through the history of sewage treatment, India is passing through a phase Europe went  150 to 200 years back. Although Sir John Harrington of UK invented the first flush toilet in 1596, effectively river Thames was an open sewer even in 19th century, a similar situation what we have in India now.It was in the mid of the 19th century that scientists knew for sure that diseases like cholera, typhoid,dysentery are spread through contaminated water which made a new mind set among the people.At the dawn of the 20th century only they started systematic treatment of sewage and waste. Public Waste management thereafter occupied an important position among civic needs along with water supply, roads and high ways,electrification,medical facilities,schooling and universities....

India cannot go on as it is in this matter for long as there is no point in being an economic power unless basic needs of the citizen are not met.If we are waiting for others to do it for us..sorry such a time will not come whether we are economically a giant or not.Only we can save ourselves!!