Narration of the meeting with the oldest business executive whom I have met (so far)...
One of the unique experiences working in Qatar - for that matter working in any of the gulf states ( Qatar,S. Arabia,UAE,Bahrain,Oman&Kuwait)- is that one gets a lot of opportunities to meet and mix with different nationals of the world.If one happens to work in a senior position in business sector such opportunities are limitless.One can interact, work together,do business,socialise with people of different background,  different culture hailing from different corners of the world, those who work in Qatar or those who visit the country on business.The above factor has a counter point as well .If one does not have the capabilities to move with other people with varied background , it would be a herculean task to climb the success ladder of the corporate in this part of the world.

In Qatar statistics indicate that 80% of the population are expatriates from other countries- mainly from the Indian subcontinent ,Near and far eastern countries , Africa and  Middle East followed up by Europeans. There are quite a number from US . Few from S America and Oceania. Visitors on business are mostly from Europe ,US , Japan , India, China and others. Even business executives from Lithuania ,Poland or Rumania come to Doha .Other than oil,cement, reinforcement steel   most of the products - industrial, construction ,consumer- are  imported. The economic boom Qatar is going through for the last so many years have attracted business men from all over the world.The fact that US and Europe is going through a slump in economy now and rise of Qatar to be the richest country on the world has boosted the position of the country to be a most sought after destination by foreigners.

When Mr.Sergio Verdini,President of Fastverdini,an Italian co manufacturing construction equipment for which my company is the distributor, along with his General Manager visited us officially, it was just a routine business matter, I thought.
When I was introduced to an elderly person -smartly dressed with pleasing manners- I was a bit curious. He spoke English reasonably well compared to many Italians I have met.

As we talked  business matters I was trying to judge his age in my mind - could be 70 or 75 ,I thought. He presented their case well, reciprocated very well on out standing issues . It was time for me to part because of another meeting I had to attend. I asked him his age. He is over 80 ! He has been working since 1954 and still going strong. He travels world wide and came to Qatar after visiting S Arabia!! In contrast in India one retires from work at 55,58 or max 60 ! If he has sufficient money he will retire even much earlier!!
I asked what is the secret of him keeping fit and trim physically and mentally. His reply surprised me. " I practice yoga . I have been doing it  for the last few decades . And I like Indian philosophy and read a lot". Smilingly he continued " I am not a vegetarian but eat meat in limited quantity. I am on liquid food once a week although my doctor advises against that" But he has never visited India , he told me.

After the business talk when I was about to leave the room , he stood up and shook my hand warmly and said loudly "VIVA INDIA . I LOVE INDIA ". 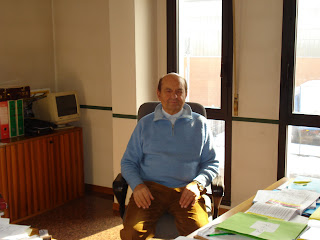 Later only I realised the fact that he happens to be the oldest person whom I have met so far for business. When I sent a customary note to him about the out come of the meeting by e mail I asked for a photograph for records. He sent his and his familys' . Let  Mr Verdini continue to have the good health and spirits. Viva Mr Verdini!!
Posted by Chacko at 21:25