THE TAJ MAHAL SHAH JAHAN DID NOT BUILD......

Staying in some of the world class five star hotels around the globe many times is  a rare experience for anyone.When someone else- not you- pays for them the experience becomes much more  sweeter!I am no exception to that.But the very thinking of the successful business deal I  had to make or the tough negotiations I had to face the next day used to dampen my moods initially especially landing for the first time in a country but got over it as years passed.

But which is the best hotel building- limited to the beauty of the structure or architecture- among those I have visited?I need not take time to answer that question or ponder over places in Europe,Far East, US or Gulf states.It is the Taj Mahal Palace hotel at Mumbai!The design is grandeur,  the locale is strategic and the view from the rooms or some of the restaurants overlooking the Gateway Of India with Arabian Sea in the background is simply spectacular.

More than that Hotel Taj Mahal old building which is trademarked, first one to do that in India- albeit a private property owned by House of Tatas- remains to this day more than as icon of India, soul of Indians.....My Indian readers please excuse if some of the info contained in this blog is already known to you... 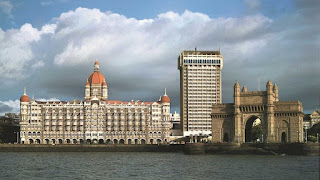 Aamchi Mumbai... Our Mumbai...city of dreams..financial capital of India
Mumbai(Bombay) is a good place but difficult to enjoy as far as I am concerned.Good place because of the cosmopolitan outlook the city bears while bad because it is too crowded even to Indian standards!At the same time I can understand why Mumbaikars-permanent residents of the city- love this great city as Aamchi Mumbai.Nevertheless the areas of Apollo Bunder,Fort,Flora Fountain,Nariman Point,Marine drive etc I like since the day of my first visit to the metropolis in 1971.Given an opportunity, during most of my short visits to the city since then, I used to enjoy walk, window shop and hang around these areas in the evening.I fell in love with the old building of Taj Mahal Hotel from my first sight, of course from a distance only since I couldn't afford pop into five star hotels those days.

But from mid 90s I could enjoy first hand the hospitality of Taj. Quite a few times.But then also the wonderful experiences remained looking out of the window or a walk in the early morning around the area, enjoying the freshness of the sea, while only the milkman or newspaper boys on cycles- later on scooters- were there on the road!But later only I  knew the actual history behind  The Taj and why Indians love this old building which is standing loud and proud to this day.

No entry to dogs and Indians!
Hotel Watson was the only luxury hotel not only in Mumbai but the whole of India during pre Taj days.It was designed by English architects, fabricated in cast iron in England on a sort of pre engineered way and sent to Mumbai on a knocked down basis which was erected as per the blue print.It was owned by a English man which  catered to only English and Europeans from 1863.It is said that there was a sign displaced at the entrance door of the hotel forbidding entry to dogs and Indians!So far it is recorded history.

Jamshedji Tata was refused entry at this hotel citing rules of the hotel towards the end of the 18th century, it is mythicized. To take revenge Jamshedji Tata decided to build a rival five star hotel not far from Watson.I find this a myth than what actually happened though I wish that it was true to satisfy my or for that matter any Indian's  ego. In fact Jamshedji was an ambitious businessman, a visionary  who wanted  to venture into new areas of business and at the same time take his country to new levels of  development.

One cannot say that there was not a revenge taken by Jamshedji .After a few years The Taj Mahal Hotel was opened to public, it was difficult for the Watson to compete with it.The performance of the  hotel went down and down, converted to accommodation and offices and  finally into oblivion!!

Designed by Indians,built by Indians and run by Indians...
Taking a plot of land on lease from Bombay Port Trust in 1898 Jamshedji Tata  envisaged of his dream project hiring services of two Indian architects named Sitaram Vaidhya and DN Mirza.The blue prints were prepared to match with the best in the industry of that time in the developed world. I always thought the  red colored ribbed central dome  makes the perspective of the building catchy which makes me reminiscent of  the iconic  dome of famous cathedral at Florence. Below the central dome inside the building there is a unique floating staircase.During course of construction architect Vaidhya died and in his place WA Chambers was appointed. 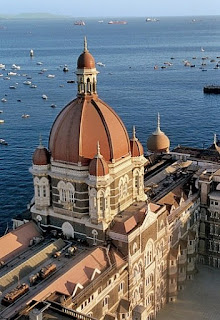 Interesting anecdotes......charm of the hotel                                               The doors of the new hotel was opened on 16 December 1903, of course during the time British were ruling India.But from inception this hotel was allowed for anyone irrespective nationality or skin color, a great achievement those days.Again it is only another myth that Jamshedji Tata had put out a sign in the early days at the door forbidding British and dogs!

When the hotel was opened, there was no electrical supply while it was running on a generator and no lifts.So also the central dome was not finished.The reason is tipped to be as advised by family astrologers!!

The hotel was converted to a hospital with 600 beds during 1914-18 WWI.There was an restaurant named as Greens Mansion next door of the hotel owned by an English grocer.Soon after opening of the hotel this was purchased by the Tatas in 1904.Eventually the new block of the Taj was opened in 1973 in this space said to compete with the Oberoi Intercontinental tower which is not far away.

In 2008 the hotel had the worst days as it was attacked by militants. All Indians were glued to the live TV channels to what had been happening for the next few days.Thankfully after some months the hotel came back to life once again.The charm of the building is that Indians of all walks of life, from all over the country or overseas, including those who have never dropped in or even seen the building at a distance love it, regard it with Indian pride.I dont think any near parallel is there in this matter elsewhere in the world.The legend will continue to inspire Indians......