But G.I. stands in the US for an  Army soldier-an enlisted person. Even those outside US who have grown up reading Marvel comics character G.I.Joe or played with such a  toy anywhere in the world also knows that. In America initially G.I. stood for 'Government Issue' but then how come G.I.came to represent an American army man?

Yo Joe is the catchy phrased war chant of the toy line and cartoon G.I Joe. Each team member of the G.I.Joe would shout 'Yo Joe' when battling the international terrorist organization!!

I am trying to unfold the interesting history of how the American soldier came to be known as G.I....how G.I.Joe was born.....how it became a multi billion dollar industry from a simple cartoon character to what it is now. 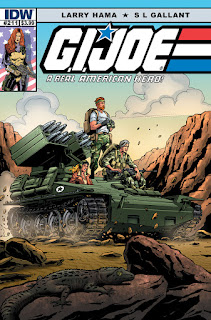 How it started...
In mid 1930s, mark of G.I. used to be stamped on trash cans and and buckets used in US military service.G.I. stood for Government Issue.It followed by many items such as G.I shoes,G.I.soap,G.I.brushes...In that context some servicemen might have used it as a self sarcastic reference that they were produced en masse by the Government.However it is not recorded anywhere.First reference of G.I. as a slang was used at the time of Douglas MacArthur....

MacArthur was an American General who successfully commanded many missions during second world war and thereafter.While serving in the Pacific sector he had a personal physician named Col Roger O Edeberg who is credited to have used the slang of G.I. for army men to General who immediately believed to have exploded hearing the slang.That was in 1935 but for some reason the slang got stuck with the US soldiers!

G.I.Joe is born....
Dave Breger was an American cartoonist who had no formal schooling in art or cartooning.While he worked in his own father's sausage factory that he coined the company slogan which was a hit of all time in that industry 'Our Wurst is the best'!Wurst means German or Austrian sausage.After getting enlisted in the US military Breger created G.I Joe for Yank, an army weekly in 1942 through a comic strip.Name of his character was Joe Trooper which was abridged to G.I Joe based on the military term "Government Issue".Within weeks from the creation of G.I.Joe it became popular.
Father of GI Joe as a toy is considered to be Donald Lemine who died in 2014.

G.I.Bill
After the end of the second world war American soldiers stationed in Pacific,Europe and Asia hoped to return to their families and get employed in US.With a good intention of providing financial security for the US services men and women President Roosevelt signed the Services Readjustment Act in June 1944.Immediately the bill came to be known more popularly as G.I.Bill since by that time an American soldier had become more known as G.I. 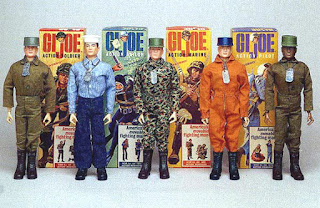 Hasbro Inc.
Three American Jewish brothers known as Hassenfeld brothers started a toy company which eventually came to be known as Hasbro Inc. They acquired the rights  of G.I Joe from 1964.Based on them, Marvel Comics published G.I Joe in hundreds of comics from 1982 to 1994.I remember having myself familiarized with such comics or toys first hand while in Doha since our children-Vinay and Vishal-were toddlers then. To this day G.I comics/toys are popular among children around the world.

Hasbro Inc is also  successful in launching a line action figures of US soldiers world wide. The first science fiction action film based on the same toy franchise created by Hasbro was made in 2009.Later they have produced such movies in 3D and IMAX 3D.The way such movies are hit at the box offices, one can expect more and more of such films in future as well taking advantage of the latest technology available from time to time to make the viewers spellbound.
National Toy Hall of Fame in US recognizes contributions of toys and games which have become iconic and popular.GI Joe was inducted there in 2004.

In India, the toy company Funskool has acquired rights from Hasbro and produced their own G.I Joe figures since 1990.