During last month, on 10 May to be precise,it was Buddha's birthday.Being an Indian, the fact that I have not seen a Buddhist shrine at close quarters till recent could be a matter of shame.I belong to a state where hardly any such shrine exists now is the real reason although I have read a lot about Buddha and Buddhists from childhood. In Kerala it should be remembered that Buddhism thrived well once upon a time which was over run by revival of Hinduism like elsewhere in India.Once I started reading habitually I always believed that Gautama Buddha is one of the most intelligent persons ever lived in the world of his time - 2700 years back.Most of his teachings are very relevant to this day.The Dharma Wheel with eight spokes represent eight paths chose by Him to have a better life...similar to 10 commandments in Christianity and 5 pillars of Islam.

Proudly India is the birthplace of this great religion. But strangely it was while in Qatar, an Islamic country that I got chances to interact with quite a number of Buddhists who were either working there or on business visits from Asian and far east countries-Japan,Korea,Sri Lanka,Singapore,Thailand,China.....In China most of them are atheists in belief but by their life style traditions they are still Buddhists I believe. In fact Buddha never claimed that he has Godly powers and always maintained that he was a human being!

Finally I could visit few Buddhist shrines,few months back.It is a irony that it is not in India but in Japan - one of the oldest in that country. 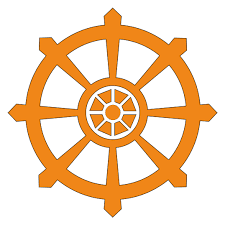 From Kisa Gautami to Steve Jobs...
The name Kisa Gautami may not be familiar but the parable related to her is very much popular in  India.She was a young, wealthy woman, a contemporary of Buddha.Her only child suddenly died of unknown illness.She was struck of grief.On the advise of some she decided to meet Buddha carrying the dead body of her son and asked him to bring back the child to life.Buddha said"Yes, there is only one way to solve your problem.To make a medicine, go and find four or five mustard seeds from any family in which there has never been a death"

Filled with hope Kisa set off from one household to another.Soon she realized that such a family where death has not taken place doesn't exist anywhere.After few hours she laid the body of the baby to rest and returned to Buddha empty handed but at peace.Buddha consoled and told her "Plants grows in spring, flower in summer and die in winter.Similarly suffering is a part of life and death comes to all of us".

Even after 2700 years, I think it is quality of deep philosophy that people like Steve Jobs found solace with Buddhism along with Hinduism. Philosophy related to Buddha is much older than those in the west which is commenced in Greece much later.

The beginning...
Details of early life of Gautama Buddha is known even to a elementary school child in India albeit the religion is  practiced by only few(2%) in this country now.However I shall shorten it and narrate here for the sake of my readers from west and middle east.Buddha, which is a title- means one who attained wisdom  - and not name, was born as a Hindu Prince in 624 BC. His father was the King of Kapilavastu, a small kingdom now in Nepal bordering India.His name original was Siddhartha Gautama and brought up in royal style.He got married and had a child.He was jolted out of his royal life when he came to know of  harsh facts of life-old age,sickness and death. This prompted him to dislike of worldly pleasures for some strange reason and left the palace in search of truth of life.

He came to  north India and started mixing with people in different walks of life but mostly of Hindu sages.He preferred the typical Indian ascetic life.It was at Bodh Gaya in Bihar that he is believed to have attained enlightenment.He was 35 then.Until he died at his 80 years , he preached and practiced his teachings in India.The teachings went well with the people and Buddhism spread in India and surrounding countries,Near East and Far East.It is the 4th largest religion in the current world after,Christianity,Islam, and Hinduism.

Subsequently Buddhism has spread to many countries-almost 15 countries. As far as I know it branches mainly to 3-Theravada(Sri Lanka,Burma etc),Mahayana (Japan,China,Korea etc) and Vajrayana(Tibet).There are quite a number of sub sects under each of the main classifications. 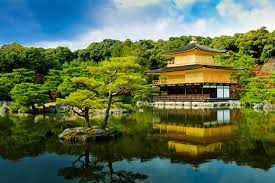 The Golden Pavilion temple
This temple dedicated to Buddha is set in a very picturesque natural surroundings. Situated at Kyoto,Japan it allows all sorts of people for a visit.In fact Buddhist shrines are open to all, a fact I learned while in Japan.Until then I was of the impression that only Christian churches can be visited by anyone.This temple belongs to Zen Buddhist faction which is maintained in the middle of a large pond with eye catching-spell bound- natural scenes around. Zen Buddhism, it is to be noted, emphasizes more into the value of meditation rather than ritual worship and study of scriptures. Each nook and corner of this large estate is naturally set for that purpose.

Buddhists believe in reincarnation.'Karma' is the force that drives the cycle of suffering and rebirth of each being. One can stop cycle of rebirth only if he or she attain 'nirvana' or ultimate bliss.It has to be noted that Buddha never claimed to be a God.He was a human being.Buddhists see him as an ideal human being and a guide who can lead towards enlightenment.It has no central text either like other religions but base on meditation. This is what Buddhism is in a nut shell, as I understand.